Listening to Eric Johnson talk about his photography is a unique experience. He was given his first camera at the age of eleven. He says he was hooked, and his excitement about the topic is so palpable that it’s obvious he has been ever since. He got a paper route to save money for his own upgrade— “a used 35mm Hanimex Practica Super TL, with extra lenses, a case, flash, tripod, etc.” In 1978, he joined the Michigan State Police as a trooper, and continued photography as a hobby until 1983, when he learned portraiture, and began doing wedding and studio photography professionally. From then until his retirement in 2009, he held parallel careers in photography and law enforcement. Since retiring, Eric has established a full-time business as a forensic photographer, and is one of six people in the world certified in both forensic photography and evidence photography. He teaches classes, and chairs the Forensic Photography & Imaging Certification Board for the International Association for Identification. 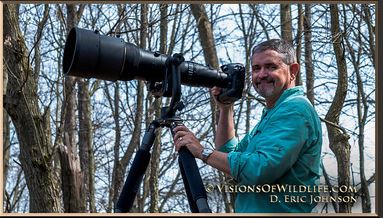 But we’re interested in Eric primarily because of his wildlife pictures. He has begun sharing them—after decades of taking them purely as a hobby—through his website, Visions of Wildlife. They are gorgeous, and he seems to have a knack for catching animals in engaging moments. His pictures convey a certain character on each creature, captivating the viewer. His collection is also a well-filled travel log, with entries ranging from the Rocky Mountains, the Grand Tetons and the Great Bear Rainforest to Kenya and Tanzania. His most recent trip (as of this posting) was to Malaysia, where he spent 9 days with his wife, Val, in the Sabah jungle. He is fascinated by nature, and his pictures, in turn, are fascinating. Each of them has its own story, and Eric enjoys sharing them along with the images. He is particularly fond of his stories from Africa, and especially Rwanda, where he and his wife spent two days hiking in the mountains, visiting and interacting with two different families of gorillas. 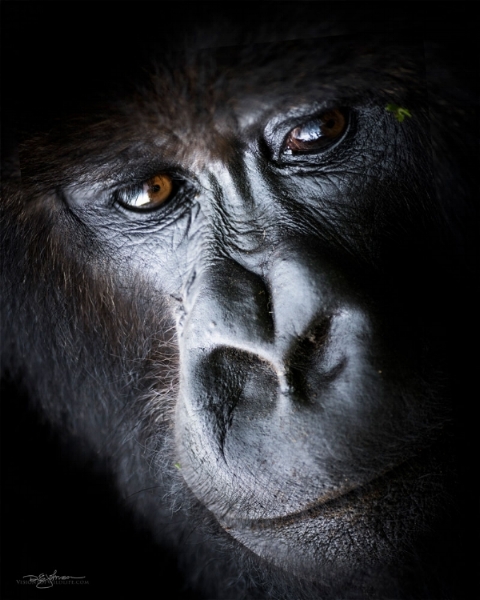 This closeup of a mountain gorilla really looks like it was taken in a studio!

Apart from travelling and photography, Eric and Val have also been involved in conservation here in Lansing for years. They are frequent faces at the Potter Park Zoo, where Val is a full-time docent and volunteer; Visions of Wildlife was the event sponsor for Bowling for Rhinos, and Eric also donated a print to help support World Rhino Day. He plays a unique role in conservation efforts, using his photography to combat one of the leading causes of environmental distress: that most people see very little of nature, and consequently cease to care about it. He cites our rapidly increasing distance from nature as the primary reason that our every-day activities have become so costly to the world around us. Consumption of palm oil, metals, and timber threaten habitats around the globe, and poaching (frequently driven by demand for misconceived medicinal products) drives many species closer to extinction. Eric puts all of this simply and eloquently: “The things we don’t see, we don’t think about—and if we don’t think about them, we don’t care about them.” 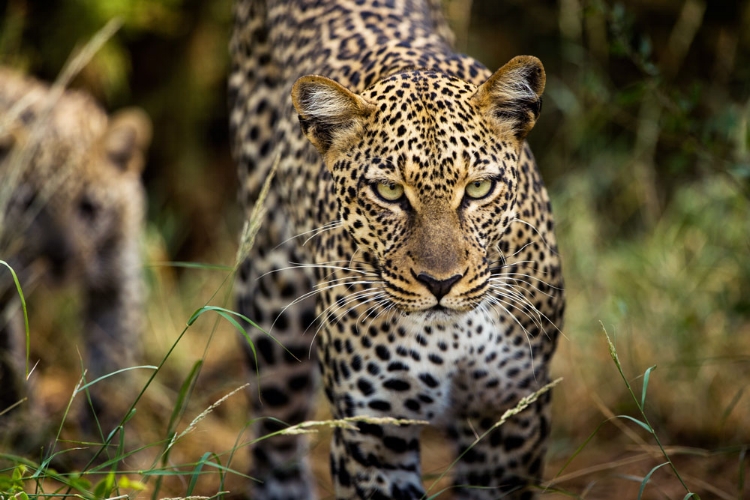 This leopard’s look is exactly why Eric uses such a long camera lens.

Eric shares his Visions of Wildlife, along with the stories of the animals he watched and places he went, hoping that the people who see his work will remember, look for themselves, and begin to care about the creatures and environments that so fascinate him. We certainly won’t forget them.