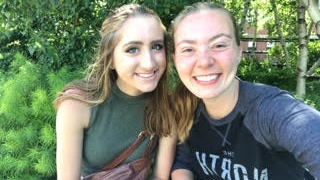 We asked Grace and Lexi to share a bit about their experiences this summer. Here’s what they wrote for us; we hope you enjoy them!

This summer, I had the honor and pleasure of working as the Eveningwear Design Intern for the Adrianna Papell division of the Adrianna Papell Group in New York City. This group that has been around since 1979 designing clothing for women of all sizes in order to make the everyday feel like an occasion. Adrianna Papell sells clothing through department stores such as Macy’s and Nordstrom, as well as through their own ecommerce site. The group is most well known for their intricate beaded gowns commonly worn as bridesmaids’ dresses, but is expanding into other areas such as jewelery, shoes, and handbags.

Throughout the summer I was given many tasks. One of my primary tasks was making swatch cards that would be sent to buyers at different department stores for their approval of colors and fabrics that would be used in future orders. I was also given the responsibility of making CADs, which are digital representations of the intended dress design that would then be used in line plans to portray what the 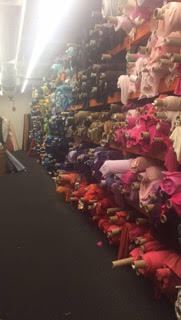 next collection would look like. Additionally, I was also given the task of dressing models for Market Week, where buyers view the line and choose which designs they want to buy, as well as tagging and hanging dress samples so they were neatly displayed on the racks.

My favorite part of the job was being able to see how the design process works from initial inspiration to finished product by sitting in on a variety of meetings. I also enjoyed getting to know and forming relationships with employees from all the different departments. Each employee, no matter if they are in Design, IT, or somewhere in between, plays such a vital role in creating a product of superior quality that will sell and ultimately make the customer happy. I truly enjoyed learning the different aspects of how everything comes together from each department. My favorite memory from my internship experience was the Company Outing where all the employees gathered for a day of friendly competition and food, allowing everyone to bond and break away from the traditional office setting. 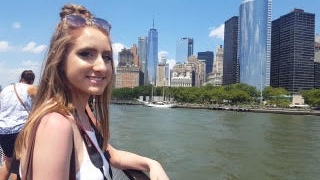 I had the opportunity to do so many different things in New York City, from the typical tourist activities such as going to the Empire State Building to the more local habit of eating brunch at a rooftop restaurant. I had two favorite experiences. The first was going to The Metropolitan Museum of Art with my coworker and fellow intern Ireaby almost every Friday for the ten weeks we were there. By doing so, we were able to see every exhibit that was there, allowing us to find inspiration in a variety of art forms from Ancient Asia to the avant garde clothing designs of Rei Kawakubo. I also had the opportunity to host Eggleston Gallery and Studio’s very own Grace Eggleston for a weekend, showing her places such as Smorgasburg, a weekly food festival filled with all of the latest food fads in Brooklyn, and the High Line, a park that was built into a former elevated railway in the Meatpacking District. I thoroughly enjoyed exploring the city and would be more than happy to give anyone interested in visiting New York some tips and tricks for getting around as well as food and activity recommendations.

Currently, I am beginning my junior year at Michigan State University pursuing a BA in Management and a BFA in Apparel and Textile Designs. Additionally, I am becoming more involved in on campus organizations such as Pi Sigma Epsilon ( a co-ed Sales and Marketing Fraternity) as well as the Fashion Design Student Association. I am looking forward to being able to spend more time this year working at Eggleston Gallery and Studios developing the online store and social media content. 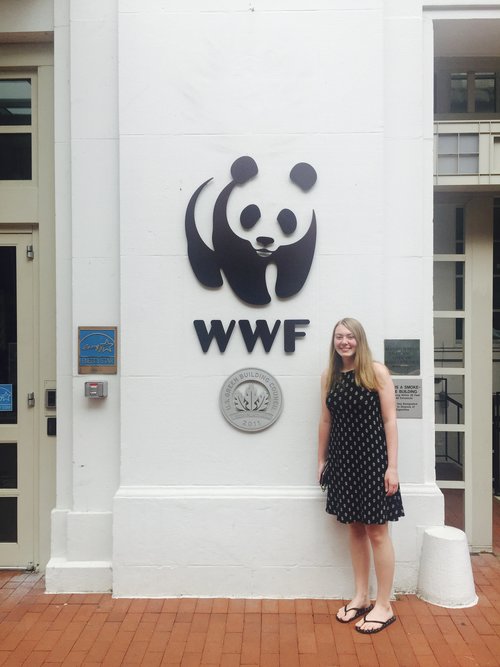 This summer I lived in Washington DC and worked as a Communications Intern at the World Wildlife Fund!

I worked as part of the Science Team on the Education for Nature Program! The program exists specifically to give grants to people from developing countries, paying for them to earn graduate and doctoral degrees at universities around the world, and then return home to improve conservation education and research in their own countries. I worked as communications support for them, helping to run social media, prepare for conferences, organize files, and contact grantees about their conservation projects. My main job throughout the summer, however, was to help compile information for and write the annual report.

My favorite part of the job was just being in the WWF headquarters building every day! The people there are extremely passionate about conservation science, and come from every corner of the world. One of the coolest things about working there was that, because it’s the US Headquarters, people from different organizations are constantly giving presentations on their new and exciting research. Every day of the week employees have the opportunity to join these speakers during their lunch break. I was lucky enough to see presentations by NASA scientists, a New York Times journalist, multiple WWF grantees, and the head of the WWF Communications team, just to name a few. Topics ranged from what it’s like to report on elephant poaching in Africa to how to successfully map mangroves with satellites! 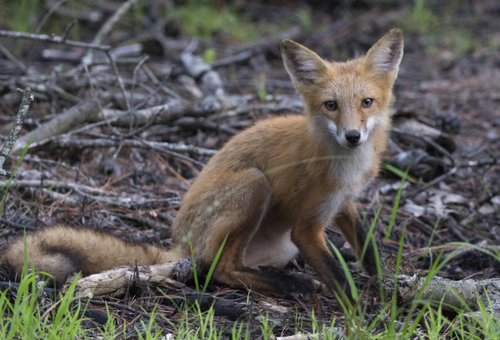 I took advantage of the city, but my favorite thing to do on weekends was to drive to all the awesome natural areas outside DC! I went to Shenandoah National Park a few times to hike on the Appalachian Trail (where I saw a black bear)! I also drove over to the Chesapeake Bay to check out the Blackwater National Wildlife Refuge, where I saw tons of birds, snakes, tadpoles, and even a red fox!

Now I am back in Pennsylvania for my senior year at the University of Pittsburgh, studying Media and Professional Communications, Film Studies, and Nonprofit Management. I graduate in April!